What happens when you touch lives??

In 1993, I was invited by the Guidance Department of H. O. Nash Secondary School to speak to a group of students who the school felt needed some encouragement. I must be honest, I was not feeling this assignment because I was afraid to speak to some young men whom I felt would not appreciate what I had to say. I remember arriving on campus still wishing to cancel the appointment. After being introduced to the class, I knew that my assignment was going to be rough and NO ONE was going to listen to me. I had a prepared text but did not use the information in the speech. I was a bit nervous, however, I spoke about how some 10 years earlier I had received 3 F's and 2 D's and had flunked out of the private high school that I attended. Despite the attempts of my parents to enroll me in another private school, there was no room for me. The only school that would accept me was a public school, R. M. Bailey Senior High.

This was ironic because this was the first time that I had publicly shared this story. (Not even my closest friends knew that I flunked out of high school) I was embrassed to admit that I was a failure and felt like a loser that day. In addition, I was sure the majority of the students did not pay any attention to my presentation. About a year later, I was invited back to the school. I knew that the Guidance Department was out of their minds this time. But I once again accepted the invitation and spoke to the 12th Grade Students. This time I spoke about the importance of attending college, technical school or obtaining some post secondary training.

When I was finished the assignment, again, I walked away. I truly felt like I did not reach these students. I did not think about this assignment any more until on Wednesday, February 20, 2002 when I got an email from a young man that has changed my outlook on assignments that I now receive.

“I just wanted to tell you THANK YOU VERY MUCH, I got your email address through one of your fraternity brothers, you see, people have a way of affecting other people's lives without even knowing it. I saw you first when I was in the 11th grade at H . O. Nash Secondary School, I was a person whom gave up on school etc, I can't really remember what you was speaking on, but it triggered something in me, I started attending school more, I was always a smart person, but never applied myself, I brought my G.P.A from a 0.95 to a 3.0 in a semester. The following year you came back and spoke highly about getting a college education abroad etc. I always thought I was not smart enough to go to college, my parents had 5 children out of 5 only 2 went to college, I was always looked upon as the slow one lol. so college was out of the question. However, I remembered what you said; it took me 4 years after.”

I never would have guessed in my wildest dreams that I would be in college let along be doing so good in all aspects, and today when I received my STAMP APPROVED APPLICATION FOR GRADUATION, you are the first person I thought about, so I wanted to say THANK YOU, and on May 12th at 10am I will be receiving my Bachelor of Science degree in Mass Communications / Journalism with a minor in English.

On Tuesday, August 3rd, 2010, I was at the counter at McDonald’s when the young man at the cash register asked, "Are you Ricardo Deveaux?", I replied yes and wanted to know why? He told me that in 2008, I came to his high school to serve as a Guest Speaker and I motivated him. He told me that because of my address, he is now enrolled in Flight School. Prior to my address, he wanted to just complete school and was not concerned about his future. This young man, once again reminded he that WE have a responsibility to change a generation. It does not necessarily take money but taking some time to mentor our leaders of tomorrow.

I would like to remind you that.... "In one hundred years fron now, It would not matter the type of car you drove, the size of the house that you lived in, the clothes you wore or the amount of funds that you had in the bank, if you didn't make a difference in the life of a child."

I would therefore like to encourage you to MENTOR a student today. We have an opportunity to change a generation. 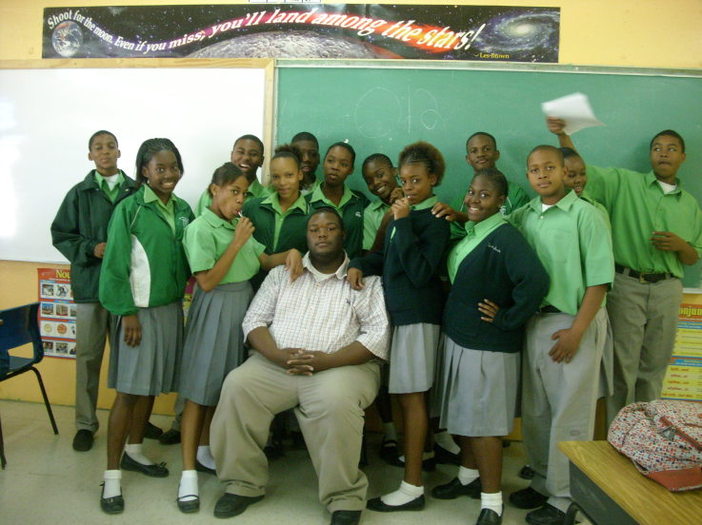