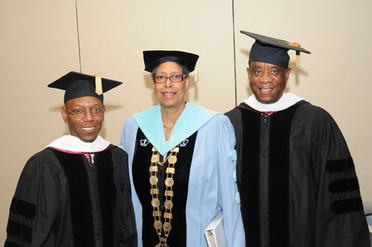 When Dr. Ricardo Deveaux recently returned to Bethune-Cookman University nearly 20-years after his graduation, flashbacks began rushing to his mind. Memories of Wildcat football games, hanging on the yard, and, of course the cafeteria cuisine danced through his mind.

In 1990, the Nassau, Bahamas native graduated from B-CU with a Bachelor of Science degree in Psychology with honors. Ironically, his path to success began with poor grades, yet his return visit to BCU would honor him for his achievements. “At first I was going to pursue a degree in Hospitality, but then I truly discovered my desire to help others,” he said. “I’ve always been concerned about people and their general welfare.” Deveaux reaches into his past to pull images of a young man who struggled through school and was not at all what many would think of as a “model student”. His daydreaming came to an end as abruptly as it began as he approached the podium to deliver the main address at his alma mater’s spring 2009 Commencement Exercises. It was one of the defining moments in the life of a former “D” and “F” student.

Deveaux’s story exhibits perseverance, grit, and faith. He will be the first to tell you a divine hand was and still is evident in his matriculation through life. “The combined support of my parents, family, and the people who saw things in me that I couldn’t see are the secrets to my success. I will continue to give of myself because I’ve seen it work miracles in people’s lives,” he said.

His personal miracle began during his high school sophomore year, when he was required to withdraw from one of the premier private secondary schools in The Bahamas after receiving three F’s and two D’s Edward and Beverly Deveaux never gave up on their son. Although they tried to enroll him in another private school, the choices were slim. So Deveaux was enrolled in a public school. As it turned out, R. M. Bailey Senior School would provide a second chance to a broken child.

Deveaux worked hard to prove that he was not the failure some thought he was. “My drive revolves around giving back. From my earliest years, I saw how my parents were more concerned with others than they were for themselves. For them it was all about the quality of life for other people.” The eldest of three boys, Deveaux says that strong ethical values were instilled in all of them early in their lives. “The three of us have different personalities. We were very involved and active. We always knew what our parents expected of us,” he confided. “I am excited to say I’m Bahamian. The way I see it, all Bahamians who have attended Bethune are inspirations to the brothers and sisters at home. We want them to strive for excellence.”

Deveaux also credits his high school administrator Charles “Chuck” Mackey along with guidance counselor – Zoie Miller-Powell for giving him a new lease on life. That lease landed him on the campus of then Bethune-Cookman College (now University).

“She spoke life into me,” Deveaux said. “During the campus visit, she told me everything that would come to pass. She said I would choose B-CC (B-CU), do well academically, serve as Student Body President, and pledge Alpha Phi Alpha Fraternity, Inc., and graduate with honors. “Everything she spoke over my life came true,” he said. At the end of his first semester at BCU, Deveaux earned a 3.83 GPA and was awarded a Challenger Scholarship from Ms. Joan Thompson, the then director of the school’s Challenger Program. For the first time in his life, he was regarded as a scholar and he says that he “has not looked back since.” He went on to serve as 1989-1990 Student Government Association President.

The prophecy continued to unfold when Deveaux pledged Alpha Phi Alpha. He is now a Life Member of the Fraternity and is the Charter President of the Nassau, Bahamas Pan-Hellenic Council, the first international council chartered by the NPHC. He became the first international council member and one of the youngest ever to serve as National First Vice-President of the million-member NPHC organization.

He reminisced about his pledging days. “I decided in 1988 that I was going to become an ‘Alpha Man’ when one of my mentors, Retired Vice-President of Student Affairs at BCU, Clarence Childs, who is an Alpha said he saw it in me. People have been seeing things in me for a while now,” he chuckled.

Deveaux continued his education at Nova Southeastern University earning a masters degree in Human Services with a specialization in Human Resources Management in 1992.

In 2008, Deveaux was selected to participate in a four-month rotation program to participate in The Cabinet Office of Bahamian Prime Minister, Right Honorable Hubert Ingraham. He now works as an administrator of a million dollar grant fund, “Self Starters” as a Senior Assistant Secretary for the Bahamas Government.

Much of his time is spent providing direction to young entrepreneurs who are interested in establishing and expanding their small businesses. “Just as someone once helped me, I am able to reach back and help someone else,” he said.

Deveaux also currently serves as President & CEO of the Bahamas Primary School Student of the Year Foundation, a nonprofit organization that sponsors an annual awards program, which he was instrumental in establishing. Since 1997, more than 1,000 of the Bahamas’ brightest scholars have shared in a half a million dollars in scholarships and prizes. Deveaux’s fundraising effort is proof positive of his commitment to reward academic excellence and achievement. In addition, he serves as member of the Board of Directors for the Ranfurly Home for Children, and he is a member of The One Bahamas Foundation and the Golden Gates World Outreach Academy.

In May 2009, Bethune-Cookman University awarded him the Honorary Degree of Doctor of Humane Letters. Deveaux is married to Pamela Deveaux, who works as a chartered accountant. They are the proud parents of two daughters, Richea Juanita and Paige Aaliyah Deveaux. Of all his accolades and accomplishments, Deveaux says he is proudest of being “just dad.” “Being dad is the best. My daughters are extremely intelligent, my wife is wonderful, and I have a wonderful support group. Life couldn’t be better.”

The Power of Our Dreams 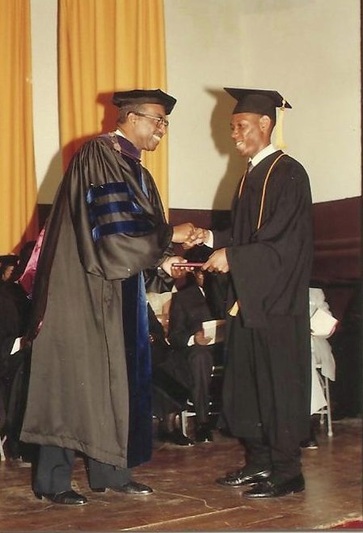 Wow, It was on Monday, April 23rd, 1990, 20 years ago, that Ricardo Deveaux walked into Moore's Gymnasium on the campus of Bethune-Cookman College and received his B.Sc in Psychology.

During the ceremony, his College President - Dr. Oswald P. Bronson, Sr. introduced him to the audience as the current Student Body President and declared success over his life.

Ricardo envision at the graduation ceremony that one day he would return to the college as its commencement speaker.  God is an awesome God. HE allowed it to happen on Saturday, May 9th, 2009, one year before his 20th Graduation Anniversary.

Daytona Beach, Florida – The Associate Board of Trustees of The Great Bethune- Cookman University are pleased to announce the appointment of Dr. Ricardo P. Deveaux to the board. Dr. Deveaux comes to the Board with a wealth of knowledge and experience in organizational leadership. The Associate Trustees pride themselves on being a dedicate organization that promotes and supports the educational, religious and financial interest of the University.

Dr. Deveaux is a Senior Assistant Secretary, Ministry of Youth, Sports & Culture and President & CEO, The Bahamas Primary School Student of the Year Foundation. He is a 1990 graduate of Bethune-Cookman College (now University) with a Bachelor of Science Degree in Psychology with honors and a 1992 graduate of Nova Southeastern University with Master of Science Degree in Human Services with a specialization in Human Resource Management. In May 2009, he delivered the commencement address at Bethune-Cookman University and was awarded the Honorary Doctorate of Humane Letters. He is only the second Bahamian and one of the youngest individuals to deliver the coveted commencement address at Bethune-Cookman University.

Mr. Kevin Perry, Chairman of the Associate Trustees in his welcoming remarks to the Board noted that “Dr. Deveaux appointment gives us an opportunity to take our membership international and reach a larger sector of alumni and friends. We are excited to have him join this august body andanticipate the wisdom and skills he will bring to the Associate Trustees.” 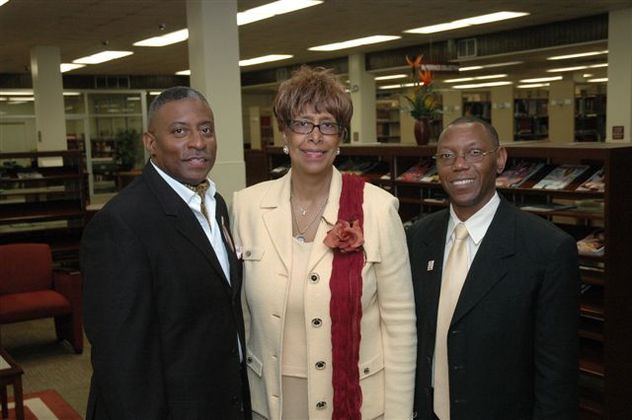